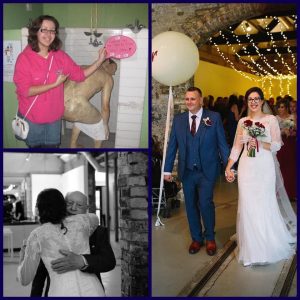 The start of a new year is always a great time to reflect.
As we move into a new decade, 2020 is an exciting year for Speech and Language Therapy as the Royal College of Speech and Language Therapists (RCSLT) celebrate their 75th anniversary.
As part of this, they have launched a set of 12 themes, one for each month of the year, to celebrate the anniversary all year long.

January kicks off the celebration with the theme of FIRSTS. I plan to complete a series of blog posts over the year to share some of my experiences throughout my journey to, and practicing as, a Speech and Language Therapist.

The theme of FIRSTS feels like a brilliant starting place as my first experience of Speech and Language Therapy was as a 3 or 4 year old child in nursery.
One Monday morning at school my teacher asked me to share some news from the weekend.
My Dad had taken me to Woodhorn Museum (a local mining museum) and I was keen to share this news with ‘Miss’.
I excitedly told her that while I was at the museum ‘I saw the man in the tower’.
My teacher, listening intently, replied ‘ooh you saw a man in a tower?!’ This resulted in me becoming frustrated and upset as I defiantly repeated ‘NO! The man in the TOWER!’

The man, was in fact, a man in a shower (showing life in the pithead ‘baths’) and not in a tower at all. This was just one of a few speech sound errors in my talking at the time. The upset I experienced that day when I wasn’t able to make myself understood was the catalyst which led to a referral to Speech and Language Therapy.
I don’t remember this day particularly, though I’ve heard about it from my parents and grandparents numerous times over the years. I do have some vague memories of sitting in a clinic room at the local hospital colouring in pictures of a train (as a now qualified SLT, I do wonder if some of my errors were ‘fronting’ and the train picture was working on front/back sounds!)

My parents tell me that I received a short block of therapy sessions and my speech improved a lot and I didn’t need any further support. For a number of years I didn’t really give any further thought to Speech and Language Therapy until my Uncle suggested it as a possible career when I was unsure which direction I wanted to go. All I knew was I wanted to work with people to help them in some way. A little research into the profession, coupled with personal experience, made me realise it was definitely the career for me.

In July 2018, I married my best friend at Woodhorn Museum, and during my wedding speech I mentioned my Speech Therapy connection with the ‘Man in the Tower’.
I couldn’t think of a better place for us to get married as not only did it play a part in my speech therapy journey but my grandad worked there as a physiotherapist when it was a working colliery during the 1950’s.

I love being a Speech and Language Therapist and I am extremely grateful for the SLT who supported me as a child. I also feel blessed to be able to help to make a positive difference with children’s communication skills every day.

Top left: Giving Voice at Woodhorn Museum next to the ‘Man in the Tower’, 2011

Right: My husband, Tony, and I just after the wedding ceremony