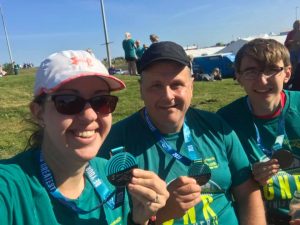 I first completed the GNR in 2014 and it was an extremely challenging event, so much so that I vowed I would never do again.
I did keep up running though and a couple of years later I found myself a running buddy and decided to give it another go.
Since then my running buddy (Tony) and I have completed it together every year (and Tony became my husband in 2018!)
This year, Tony’s son Jack also wanted to complete the GNR for the first time so we all signed up together and ran for SMIRA as a team.

A child with Selective Mutism is terrified, frozen and unable to speak in certain situations and this has a huge impact on their daily lives. That’s why we decided to run for SMIRA – to raise awareness of Selective Mutism and also to raise some vital funds for them.

Running is not something that comes naturally to me but I have worked hard to become a runner and it has taught me a lot about dedication and continuing to try even when I would rather give up. Every time I felt like giving up yesterday, I dug a little deeper and remembered why I was doing it in the first place; to make a difference to the lives of young people with Selective Mutism.

Children with SM face challenges every single day. Can you imagine what it would feel like to be so frozen by fear and anxiety that you are unable to speak? With early intervention and the correct support, Selective Mutism can be overcome and children can begin to talk in situations they were previously unable to.

The GNR was especially difficult yesterday as it was hotter than we expected and we did not manage to fit in as much hill training as we should have done this time round (those of you who are familiar with the route will appreciate how undulating it is from Newcastle to South Shields!) Difficulty aside, overall it was a great day and we are proud we made it to the finish. We are especially proud of Jack who completed his first half marathon in 2 hours 25 minutes!

We have raised more than £200 for SMIRA and we are extremely grateful for everyone’s support. It’s not too late to sponsor us if you would like to help us to raise even more. Every penny really does count.